Wet abrasive blasting (also known as dustless blasting, vapour blasting or wet blasting) has become the industry standard in Australia when it comes to preparing and cleaning surfaces, superseding many of the conventional dry blasting methods such as shot blasting or soda blasting.

There are several reasons behind this shift to improved wet blasting technologies, the most notable being enhanced workforce safety, the increased operating efficiency it affords, and greater efficacy when it comes to surface preparation.

With conventional dry blasting methods like air blasting, where dry blast media such as silica sand is propelled with enormous force against the substrate, particles from the media can produce significant amounts of dust as it breaks down on hitting the surface. This dust containing remnants of the media then has the potential of being inhaled by operators if their PPE doesn’t provide sufficient protection, while it can also spread beyond the immediate confines of the worksite if proper encapsulation is not in place, putting others on the worksite and beyond at risk.

As wet abrasive blasting produces little or no dust, operators are at significantly less risk of inhaling these minute blast media particles, making for a safer worksite both for those in the immediate vicinity and others who might also come into contact with dust that is produced in dry blasting.

The fact that wet abrasive blasting produces virtually no dust also leads to greater workplace productivity. This is because there is no need to halt other worksite operations while blasting is taking place, as the immediate surrounds are in no danger of escaping dust being able to affect workers, meaning there is no need to stop work elsewhere on a site.

Also, without the need for encapsulation to be constantly erected and taken down, there is less downtime on a worksite, leading to far greater productivity. Also, other work can continue in the immediate vicinity meaning there’s no lost time while wet abrasive blasting is being carried out.

When it comes to cleaning and preparing surfaces, industry is increasingly adopting wet abrasive blasting as the most efficient and effective method. It removes rust, scaling and other contaminants from almost all surfaces, and better prepares substrates for painting and protective coating.

Wet abrasive blasting is so effective at surface preparation prior to the application of protective coating because, while the surface is now clear of contaminants, it is not rendered entirely smooth. Minute peaks and troughs are formed, and these enable the paint or coating that is being applied to ‘anchor’ more completely on to the surface.

While dry blasting methods aim to achieve the same results, minute remnants of media can often become embedded in the surface being blasted, so that the surface is not entirely clean nor contaminant free, and this can ultimately compromise the adhesive qualities of the protective coating.

However, using a wet abrasive blasting technique ensues that soluble salts (a constant danger in marine environments), blast media and other contaminants are cleared from the surface completely, meaning that paint and protective coatings can be applied to a clean, profiled surface, which ensures greater adherence and protection.

Why Is Wet Abrasive Blasting Different To Dry Blasting Methods?

The key difference between wet abrasive blasting methods and dry blasting, such as sandblasting, is the use of a combination of compressed air and water to propel the blast media, rather than simply air alone.

Each blast media particle is encased in water, and this cushions the media as it hits the surface; this is why contaminants such as soluble salts don’t remain on the freshly-blasted substrate, as the water washes them away, and why wet abrasive blasting produces little if any dust, as the blast media fragments are enveloped by the water and unable to be dispersed into the air. In addition, less dust and fewer media fragments means that ultimately less waste is produced, which is a further positive environmental outcome of the process.

We have the full range of highly versatile Quill Falcon Cyclone Dustless Blasting machines for sale and hire in Adelaide and throughout Australia. Call us on (08) 8345 0719 or email us to enquire about our portable abrasive blasting equipment and how you can take advantage of its superior cleaning and profiling abilities. 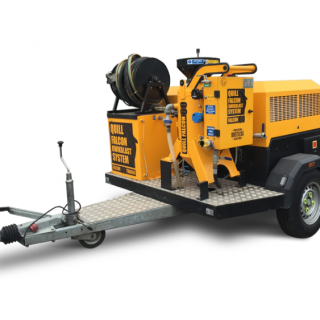 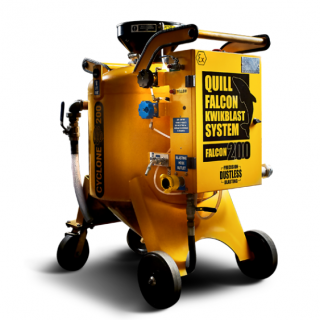 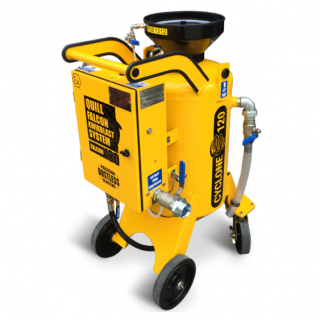 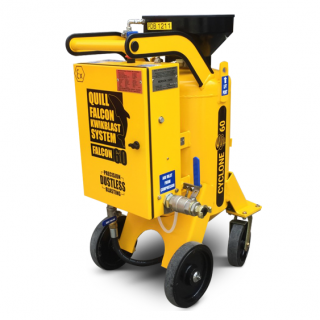 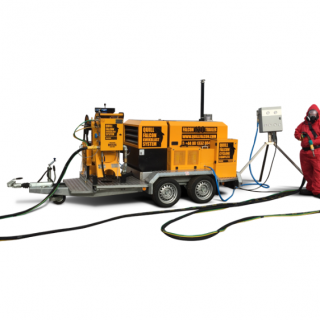 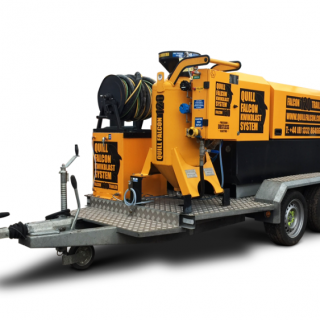